SCIENCE AT THE EDGE SEMINAR SERIES 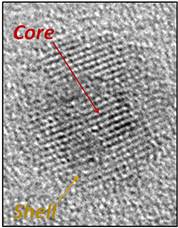 The two key benefits of this approach include: (i) all-inorganic architecture promoting superior thermal and chemical stability, and - (ii) a unique film morphology, which offers the possibility of tuning the film properties between conducting (for applications in solar cells) and light-emitting (LEDs, lasers) simply by changing the interparticle distance in the matrix. This approach is universal and can be extended to a large number of nanocrystal/matrix combinations.